In the previous episode, we got to see the vocal and dance representatives of each group partner with those of other groups to form and perform in a unit. Last night, they uncovered the results for the unit performances (first section of round 3) and aired 3 of 6 performances that comprise round three's second half (To see the rules of round 3, read this article).

What's that red smudge around her lips? Spooky!!


Here are the highlights of last night's episode.

Oh My Girl's Yuah Places First in the Dance Unit of Round 3 Pt. 1

Due to an injury, Yuah wasn't able to dance with the rest of Oh My Girl in Round 2 for which the group proudly took first place. Feeling a sense of responsibility to contribute to her group's success this time, she burdened herself with doing well in this round. And guess what? She did just fine.

When Yuah reveals her achievement, leader Seunghee breaks into tears. What a precious moment! 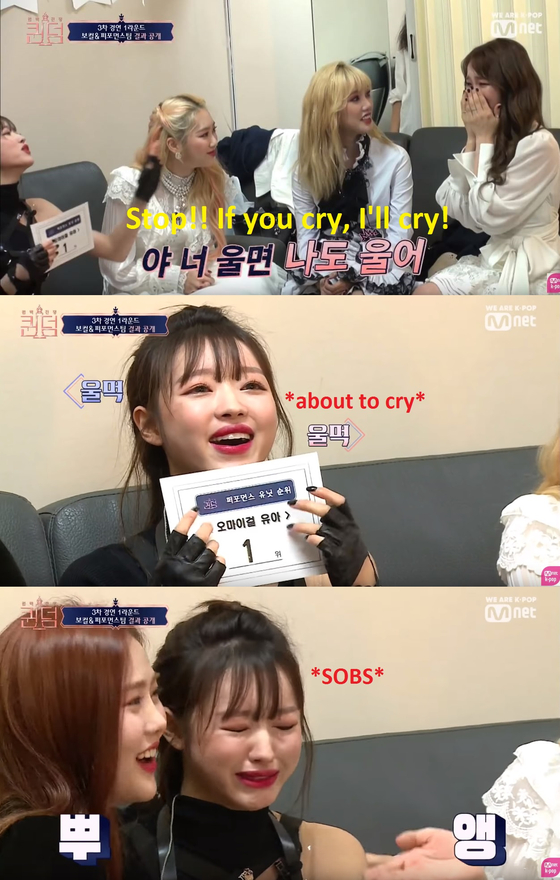 The AOA Girls Have Each Others' Backs

Hyejung represented AOA for the vocal unit performance, partnering with (G)Idle's representative Minnie. Unfortunately, the pair placed last in the round despite their outstanding harmony.

But the rest of the AOA's girls were unfazed by the results. If anything, they were aggravated because they truly believed Hyejung deserved a better ranking. The girls deny the legitimacy of the results and cheer up Hyejung - this is what I call great teamwork.

First round's winner (G)Idle did it again - they left everyone totally "shook" with their terrifying but beautiful performance.


The group decided to go with one of their less known song's and coat it with a "nightmare theme," just in time for the upcoming spooky holiday.


Very understandably, the audience confessed that they were left with an overwhelming number of goosebumps.


The remix, costumes, stage art, each and every one of their performance skills - everything was on point.

Next week's episode will reveal the final rankings for Round 3. Stay tuned!