BTS' official YouTube channel released a new episode of their 'Bangtan Bomb' series earlier this week! The video provides a snapshot of some BTS (behind-the-scenes, not BTS oppas - haha!) action of a photoshoot for their album 'MAP OF THE SOUL : PERSONA' (see finished photos here).


While not-so-mindlessly watching the gorgeous BTS boys in the video, we actually noticed something fascinating: V constantly copies the other members' actions. And more importantly, he doesn't seem to realize what he's doing!

Let's take J-Hope and his toy, for example. Near the beginning of the video, J-hope is goofing around with other members while squishing a little toy in his hand. We see V's eyes take notice to the toy, which even J-hope doesn't seem to be aware of:


Next thing we know, V has acquired the same squishy toy for himself:


Not only does V now have the same toy, he starts playing with it in the exact same manner as J-hope is - blowing air from the toy onto his skin. Look at these side-by-side photos:


Then, we see his copycat skills apply to Jungkook during the selfie scene. It is almost unreal. Every time Jungkook displays a new face for the selfie, V follows his footsteps instantaneously.

Again, it doesn't seem like V is acting this way on purpose. In fact, he doesn't even take a good look at Jungkook before he somehow perfectly copies/pastes JK's look.


WHAT IS GOING ON, TAEHYUNG???

Oh, it doesn't end there. The boys pose for a final photo with all of them taking a mirror selfie. Although unclear who he's talking to, V calls one of the hyungs and says, "this is how kids take photos these days," as he flexes a unique grip on his phone. 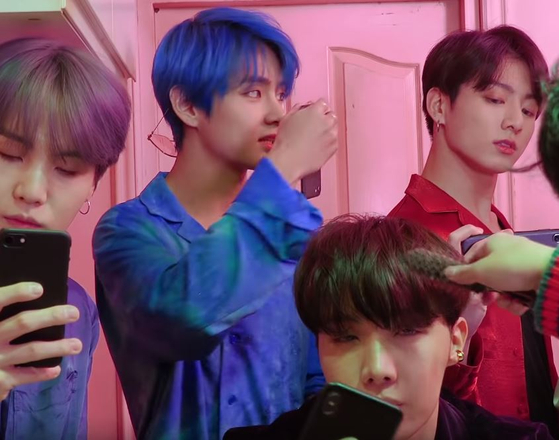 
So in the next shot, we see that V is the only one holding his phone differently. J-hope, Jungkook, and Jimin hold their phone horizontally while RM, Jin, and Suga hold it vertically with their fingers fully wrapping their phones. V, on the contrary, hold s his phone vertically but stabilizes his grip with just his thumb and index finger.


To no one's surprise, this moment only lasts a split second. V glances to the side:


So why does V keep copying other BTS members? We'll tell you this - it's not his intention to express neither positive or negative emotions towards them.

Here's an appropriate psychological analysis to answer your inquiries.

V's behavior can be characterized as "mirroring." Mirroring refers to the behavior in which someone unconsciously imitates non-verbal signals such as gestures, actions, and attitudes of another person. It occurs when the person "mirroring" wants to build a stronger connection as well as understanding with the individual that they are replicating. It differs from conscious imitation from jealousy or mimicry for mockery - instead, mirroring generates from a subliminal affection towards someone and often goes unnoticed when it happens. We just happened to catch it on camera!

In other words, mirroring is one of the easiest ways to confirm that someone likes you, just like V likes the members he mimics. He isn't purposefully doing so. His brain simply orders him to because Taehyung, even in his deep layer of unconsciousness and beyond, loves his BTS brothers and just wants to strengthen their bond.

Hope you enjoyed this little psychology lesson! Now, you can understand why any BTS member copies any other BTS member.

Related Article:
Why Being JIN's Masternim Is The Easiest Job