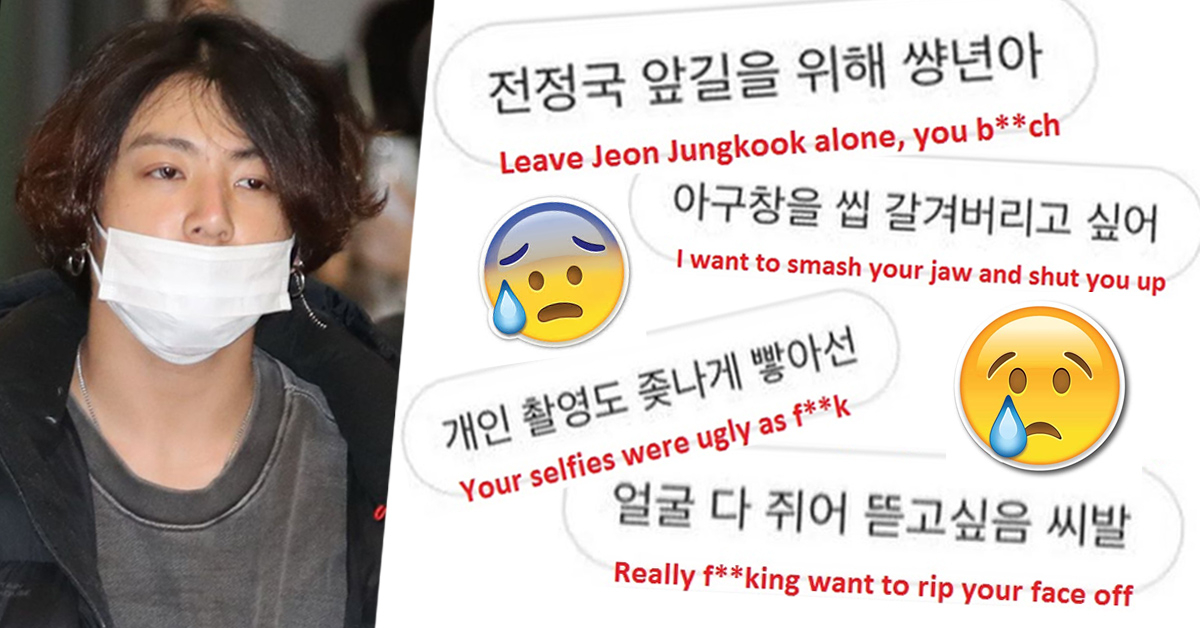 
One month since BTS Jungkook's dating scandal with female tattooist Lee Mijoo broke out, her tattoo shop 'Tat2Luv' spoke out in response to the backlash they had been facing.

The scandal's aftermath has gotten out of control.


The shop's official Instagram - now a private account - uploaded a series of screenshots uncovering brutal, malicious messages the tattoo shop had been receiving, along with a long caption pleading the haters to stop the harassment. The caption began with the claim that the shop had been "receiving hundreds of these messages every day."


On September 16, a leaked photo of Jungkook hugging a blonde girl sparked dating rumors that ultimately broke the Internet. The blonde female was identified as Lee Mijoo, a tattooist of tattoo shop 'Tat2Luv' which Jungkook had allegedly visited for a new design on his hand. When the news broke, Tat2Luv as well as Lee both immediately confirmed that the rumors were false. BTS' management agency BigHit Entertainment also denied the rumors and declared that they'd "take legal action" responding to defamation.

Rapper HashSwan clarifies that he is "not the person in the photo" with Jungkook, as BTS fans ask him to confirm (Photo from Instagram @hashblanccoa)


Regardless, some angry fans continued to invade the tattoo shop's inbox with terrorizing messages. 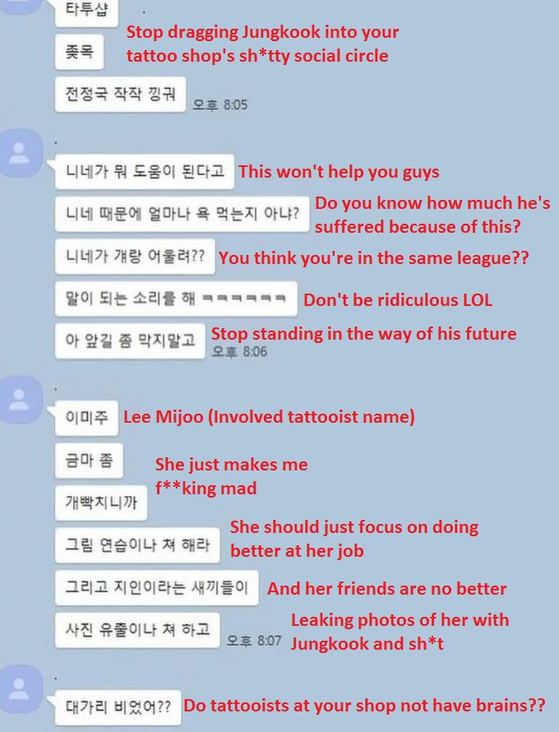 
"This time following the incident has been incredibly painful and detrimental for us, and it has only been getting worse," they said. "We've had the police called on us. We've had to go to therapy. We haven't been getting sleep. We've been excessively drinking to cope with the struggles. Even our family, friends, and acquaintances have received threats. Are you asking us to live like this?"


Tat2Luv also expressed disappointment with BigHit's handling of the situation. "We reached out to BigHit when this scandal first made headlines. They believed that we should keep a low profile and that the news will fizzle out on its own," they said. "So we did exactly that, trusting that they'd deal with the situation if things got out of hand. But they did not take any action. They said that they 'are not responsible for the activities Jungkook engaged in during his vacation,' and they haven't contacted us since."

Concluding the overwhelming post, the tattoo shop made sure to clarify that the majority of these messages were actually not from BTS fans. And even though some were, they said they understand that this sample does not represent the entirety of ARMY.

"We apologize if there were any misunderstandings about our feelings toward ARMY," they posted. "We are so grateful for the many BTS fans that have supported us through this difficult time."

Related Article:
Who Was JIMIN Vacationing With In Hawaii?