It all started with RM's short comment on Weverse.

We feel the pain buddy


FYI, Weverse is a fan community for BTS, TXT, and GFriend, where the idols can actively communicate with fans by leaving comments on their posts.

Just like any other day, RM left a comment on a BTS meme, and international fans waited for a BTS translating account on Twitter to translate what he said. But what came next wasn't a translation, but a helpless cry saying "Ah Chosun Dynasty Boongdang is really out of hand...".


Then the translator explained that to translate RM's comment, you should have a basic understanding of politics during the Chosun dynasty.


A few minutes later, the translation was posted with a comment "I cry" from the translator.


So for those of you who still don't have a clue of what RM is talking about, let me explain further.

A fan posted a graph explaining ARMYs' preference in Suga's hairstyle with the Chosun dynasty politics change. There were various parties during that time, and politicians with the same opinions would pair up, and then split again if they had a disagreement.


It's pretty complicated, which is why students studying Korean history made parodies of the graph with their K-Pop bias to help them understand and memorize it better. Ironically, international fans actually have to study Korean history firsthand to understand RM's joke!

Sure enough, many foreign fans started to look up "Silhak" and "Boongdang" on Wikipedia, while domestic fans watched the whole thing amused. 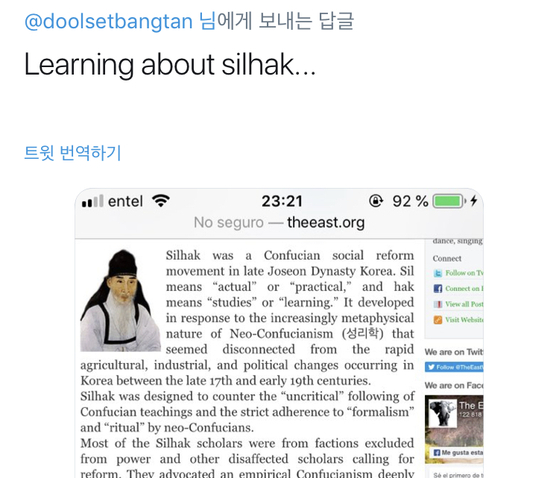 
Fans wrote, "Who would have thought that people living on the other side of the Earth would be studying politics of the Chosun dynasty because of K-Pop?" and "That part is difficult even for us Koreans!".

Related articles:
JIN Talks About Getting Allowances From His Aunt This Holiday