A few hours after Mnet told that they will not be responding to the latest controversy about the Produce X 101 final episode vote count, they uploaded a post on Facebook explaining that there was no manipulating of vote counts. Here is what they had to say.

Do you think this a sufficient explanation?


"We would like to address the recent controversies about the difference in the number of votes.

Firstly, as producers of the show, we would like to apologize for bringing up such controversy in regards to the SMS voting.

Produce X 101 announced 11 members to debut on July 19 and revealed the total count of votes for each trainee, which are the added numbers of the online votes prior to the airing of the live broadcast, and the live SMS votes.

After the show ended, the Produce X 101 crew were brought to the attention that the vote count difference between some trainees was the same, and after looking into the matter, we confirmed that the ranking itself including the X trainee hasn't been altered, but the vote count that we informed during the broadcast had some errors in the process of compiling and transmitting.

We would like to give further explanations to why the differences in vote count were the same for some trainees. The crew who were responsible for compiling the vote counts have also calculated the percentage of each trainees' votes to verify the ranking in multiple ways. However, in the process of verifying the final ranking, we rounded up from the second decimal place, and the percentage that was converted back to the actual view count was aired live.

Therefore, we would like to point out that there was no altering in the ranking itself.

We apologize once again to all national producers who supported the show and voted for the trainees, and to our trainees and those who were related.

We will redeem our vote counting system to prevent similar errors occurring again.

Also, we will do our best to produce a fair and transparent program from this day on." 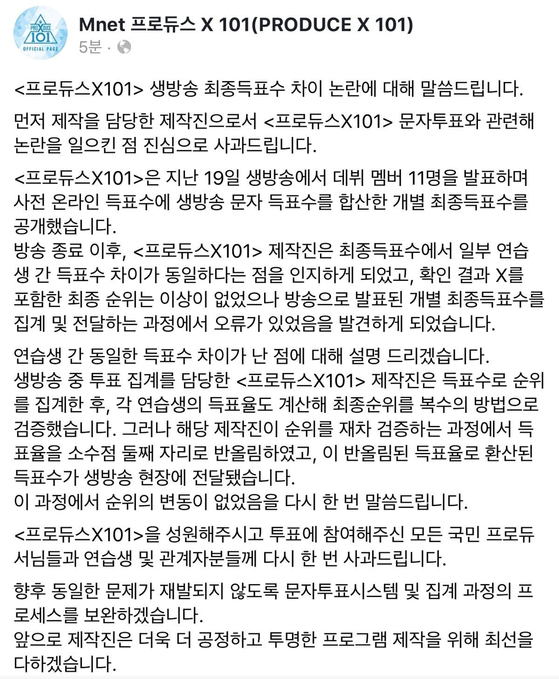 
However, national producers are still unconvinced by the explanation because of several reasons. One, because it would be much more inconvenient to calculate the percentage and then converting it back to the actual vote count, rather than to just announce the actual vote count during the show. Also, it still doesn't fully explain the crazy coincidence that the vote difference of each trainee was exactly the same.

What do you think of Mnet's explanation? Leave a comment to let us know what you think.