BTS is the 43th Highest-Paid Celebrity in the World!

Young, handsome, and RICH...They have literally everything


American business magazine Forbes announced the highest paid celebrities list today and BTS proudly got their names on the list. 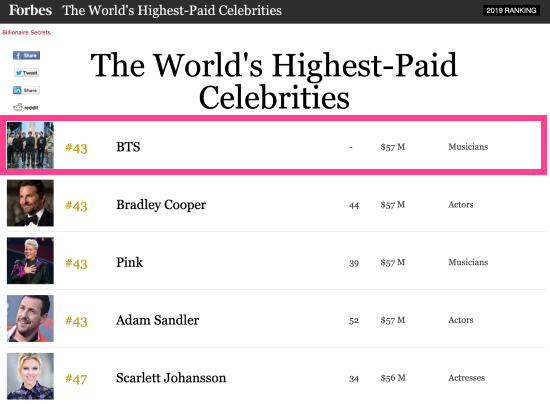 
BTS ranked 43th place alongside American actor Bradley Cooper, pop star Pink, and actor slash comedian Adam Sandler. They are higher up in the list than Scarlett Johansson, Bruno Mars, Eminem, and Ariana Grande. No.1 went to Taylor Swift followed by Kylie Jenner and Kanye West in that order.

BTS earned an estimated sum of 57 million dollars and Forbes reported that the Love Yourself series helped them greatly in earning the spot.

They got looks, talent, beloved fans, and even wealth! And they totally deserve it.

Related articles:
Is BTS Having Another Concert in October?