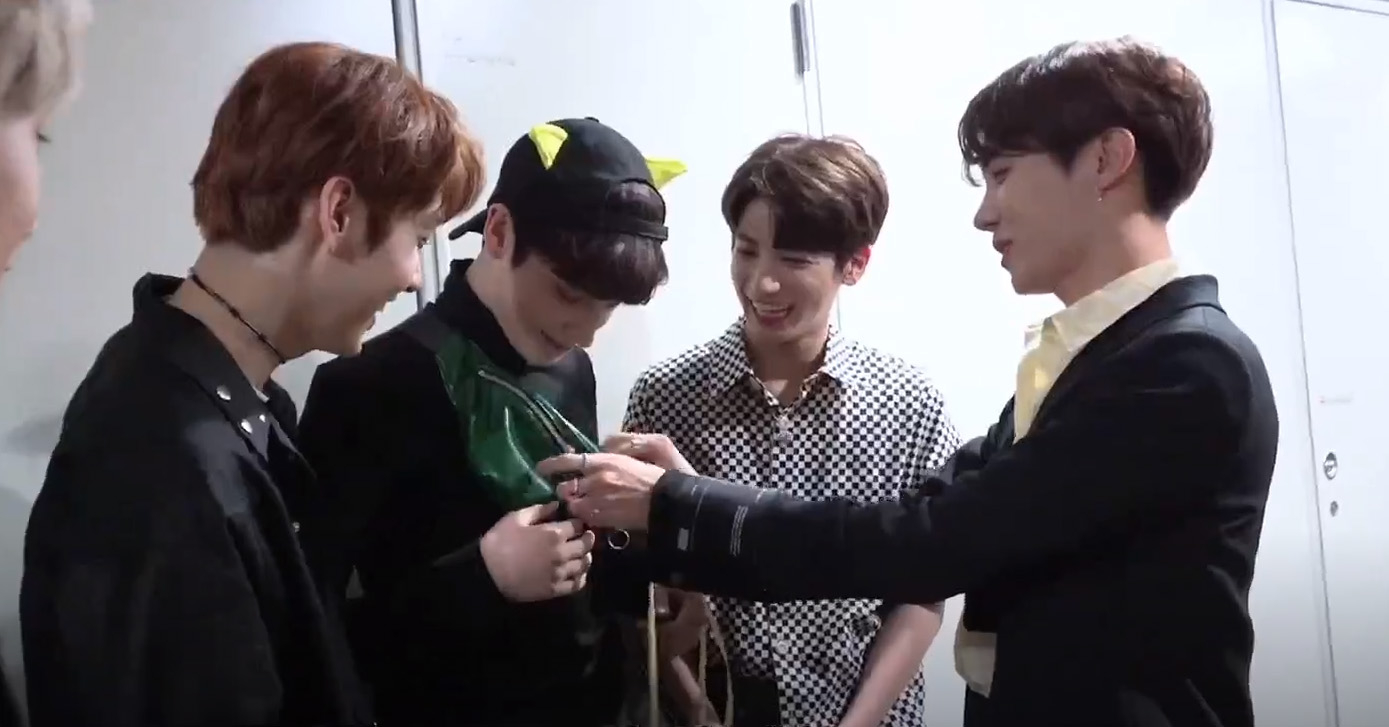 
Remember the time when BTS was the youngest group in BigHit? With TXT's debut, they are now a proud "Sunbae" to give them advice and support by their 6 years of past experience. Not only is BTS their first Sunbae for TXT, but it's also the first time for BTS to become a Sunbae as well. TXT's new reality program ONE DREAM. TXT aired yesterday and fans got a glimpse of BTS's Sunbae moments.

Guess which member had 10 pictures of JUNGKOOK in his profile picture history!


A few months ago, TXT and BTS appeared on the same music show for their songs Cat & Dog and Boy With Luv. It was only their 2nd official gathering so you can imagine how awkward the atmosphere was.

J-HOPE tries to brighten up the mood by giving HUENING KAI some extra advice.


J-HOPE: What's in that bag?
TXT: (Just laughs)
J-HOPE: There's a line that you can use in these situations. "Our fans' love".

TXT walks in BTS's waiting room and chants their official introduction chant. Even though BTS is their seniors they also greet them with the official BTS chant.

SUGA: Can't we just greet them casually now? Like "Hey".
JIMIN: Then it will make them more uncomfortable.

Considerate JIMIN also tries to brighten up the mood the same way J-HOPE did by mentioning Huening Kai's cute bag. J-HOPE springs up from his seat to test his hoobae.


JIMIN: That's a cute bag.
J-HOPE: Huening Kai! What's in that bag?
JUNGKOOK: Nothing probably.
J-HOPE: What did I teach you?
HUENING KAI: Our fan's love.

When SUBIN asked BTS for advice before they went to the US for their showcase, each member gave their earnest advice. RM said, "Looking back on when we did our first US showcase, it was for Boy In Love at the arena. The audiences' reaction was really good and the reason why wasn't because we were so talented but because of how powerful our attitudes were. We wanted to show that we can rip the stage. The US will probably be looking forward to that kind of attitude and if you can show that, their reaction will be good."


SUGA said, "If you don't do your first stage very well, the atmosphere might not be good. They come with expectations and if you don't meet their expectations, it's really hard to make a good performance."

And of course, they didn't forget to give compliments and cheer them on. V told them he personally thinks that they will do a good job and JIMIN said "I don't think there's anything else we can advise you because you guys are doing so well. I've seen your performances and it's already so good."

RM mentioned a fun story of how he figured out TAEHYUN was a huge fan of JUNGKOOK.


"Actually, when I met TXT personally the other day I got all their contacts. I saw TAEHYUN's profile picture history and there were over 10 pictures of you(JUNGKOOK)."

What would I give to have BTS as my Sunbae? You can check out the full video below!