BTS successfully finished their Speak Yourself LA Tour in the Rose Bowl Stadium on May 4th and 5th with amazing stage performance unlike any other. Here's a recap on the highlights of the show for those who couldn't go (including myself).

Why was I not there?


1. The best opening ever 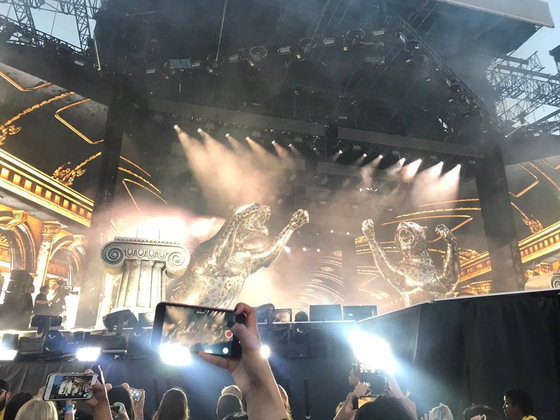 
2. JUNGKOOK flying around the stadium


During his solo performance of Euphoria, JUNGKOOK literally flew all around the stadium just holding onto a handle and with the protection of a belt around his waist.


He nailed the performance with stable singing and fearless gestures whilst hanging onto the handle, and ARMYs went wild as JUNGKOOK flew over their heads. Only JUNGKOOK can pull off something like that for sure!


V killed it on stage just by gazing into the camera lens. His solo performance of Singularity started off with him lying on a bed, eyes closed. On cue with the music, he suddenly opened his eyes making the audience go wild.


As RM waved his finger about, the screen showed amazing visual effects following his every single move. Fans were reminded of the iconic Disney channel neon effect, and others also joked on how RM was filming his own version of Frozen.

5. Jimin popping the bubble he was inside


Jimin started his performance of Serendipity inside a huge bubble. The moment his finger touched the surface, it instantly popped and vanished. If this isn't enough proof that Jimin is actually a living fairy, I don't know what is!

6. The perfect ending to a perfect concert


A giant statue of BTS's logo slowly rose from the ground with never-ending fireworks, bringing the unforgettable concert to an end.

Which performance would you like to see with your own eyes? Leave a comment and let us know!

Related articles:
QUIZ: Can You Guess Who These BTS Members are Just By Their Lips?