Scandals, Suicide, and Plastic surgeries?! Is that all there is to K-pop? 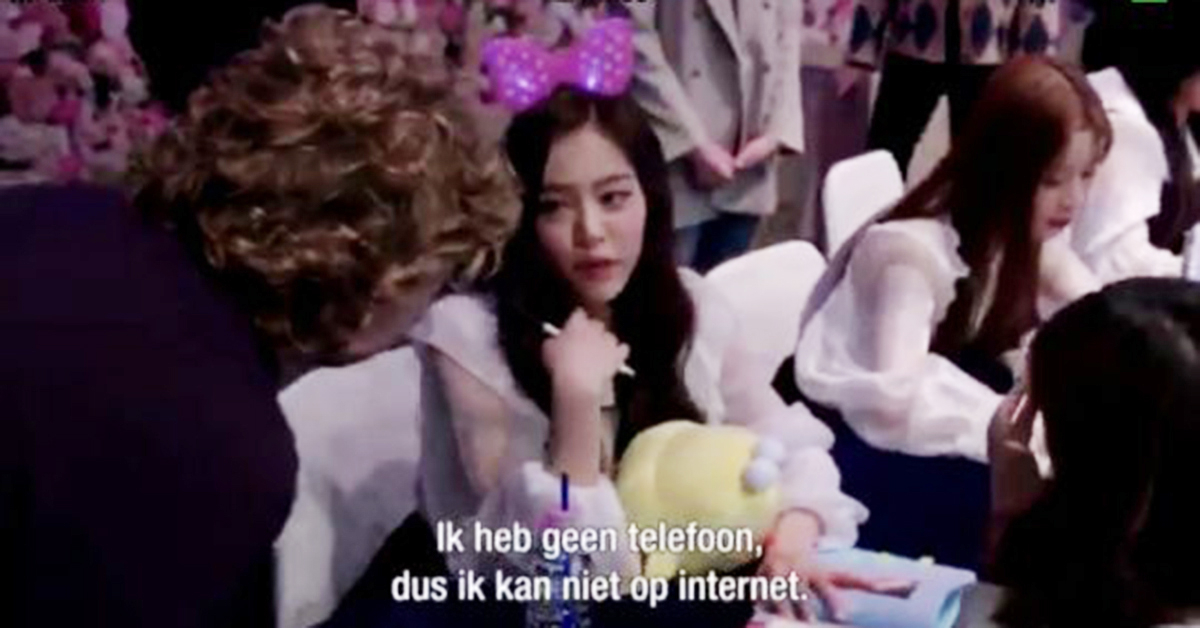 
On 16th of this month, Netherland’s public broadcasting program RTL 5 aired a K-pop documentary, titled ‘Ewout & Tough K-pop World.’ With K-pop groups like BTS and Blackpink following successful trajectories to the world’s top, K-pop has been garnering a lot of attention all over the globe. So a documentary about this lucrative industry only seemed natural. The film promised to provide deep insight to Dutch viewers who craved to know more about this musical sensation.

Why this Dutch Portrayal of K-pop angered many fans


The viewers, however, were disappointingly misled. The film focused on the three most primary prejudices of Korea and its music industry: plastic surgeries, scandals, and depression. The show refused to extend to anything else and showed little respect to the K-pop artists they were portraying. The documentary’s regretful portrayal angered many K-pop fans. 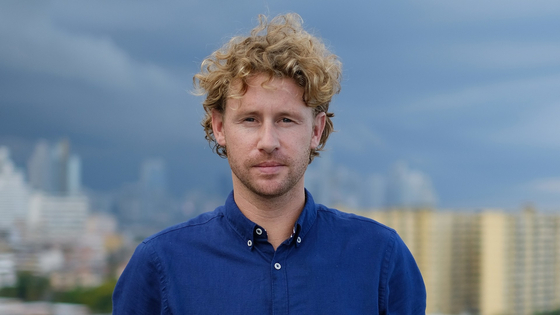 
The documentary primarily featured a rookie idol group GWSN (Gongwon Sonyeo) who debuted on September 5, 2018, under a company named Kiwi Pop, a sublabel of Kiwi Media Group. The members of GWSN was promised to be portrayed as stars on the lookout. They, however, were treated with little respect during the interviews and were belittled to subjects of scandals and plastic surgeries. Image from Ilgan Sports (a photo of GWSN) 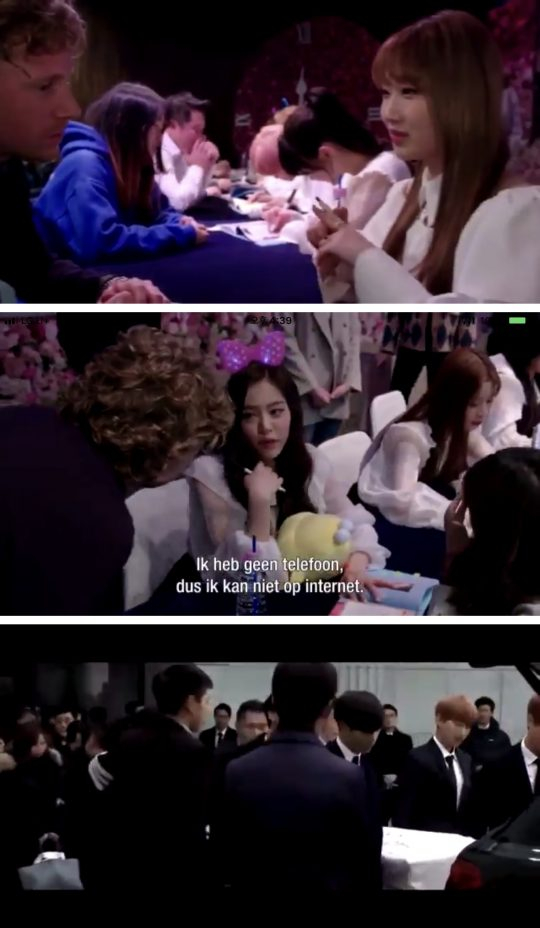 
Here are some of the clips from their interviews. In the first clip, the interviewer badgers one of the members of GWSN, by repeatedly questioning her if she had undergone any plastic surgery procedures. When she replies no, he asks again “Yes?” as if in disbelief.


In the second clip, the interviewer rudely interrupts the fan’s time with her beloved idol, to inquire one of the members GWSN about scandals in the K-pop industry. The interviewer showed little respect for the fan and the star’s time. It was later stated in the formal apology letter of Kiwi Pop that this interview was conducted without any prior consent.

Even when members of GWSN denied every accusation of plastic surgeries and scandals, the entire duration of the show deliberately continued to portray members of GWSN and other K-pop artists as victims of the malicious K-pop industry. One of the most regretful moments of the show was when they repetitiously showed the scenes of Jonghyun’s funeral. Jonghyun was a beloved idol star and one of the members of the K-pop group, SHINEE, who tragically passed due to suicide after enduring many painful years of severe depression. The film insinuated that many other K-pop stars were also easily prone to such depression. I don’t think I need to further mention how tasteless it is to use someone’s tragic death to reinforce a faulty stereotype.


Not by surprise, K-pop fans were angered. They were angered at the distorted image of K-pop the documentary has shown and at Kiwi pop for letting their stars to be maltreated in such a manner. After the airing of the show, Kiwi pop, the label company issued a formal apology.

Here is the translation:

‘Hello this is Kiwi Pop.

We would like to state our official position about the documentary film ‘Ewout & the Tough K-pop World’ that was released through Netherland’s broadcasting station, RTL, and Videoland.

During the casting, the respective program informed us that they were a publicly approved company who wished to produce a documentary about the K-pop industry and to draw the successful career path of GWSN as rising stars of K-pop.
During the filming of the fan signing event, however, the crew barged into the event and conducted interviews, without the consent of any of our staff members. We asked them to refrain from such behavior, to edit out the scenes of the interview where the staff members and the fans were exposed, and to only release the footage of GWSN that we consented to, but none of these requests were met. The footage was released without any of our prior knowledge or consent.
When we did receive the broadcasted film, we felt deeply sorry about how they distorted the image of GWSN, which was far from the intent of the documentary film that they originally informed us of.

After this has been brought to our attention, we at Kiwi Pop are now in the process of contacting the production crew to bring light to this situation, and we will notify you again after we have gained some clarity.
We would like to apologize to the fans who were taken aback by this unexpected incident, and we at Kiwi pop will now exact more prudence into our future activities.
Again, we are deeply sorry to the fans who love and cherish GWSN.
Thank you,’ 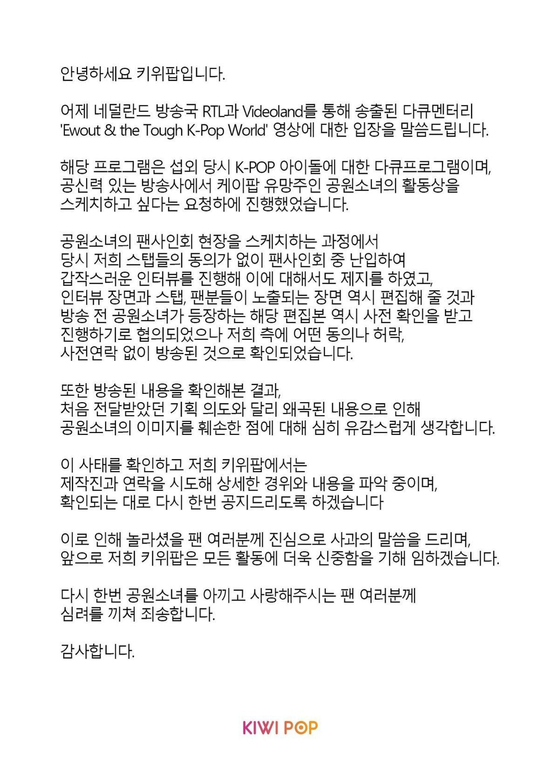 
This article is not to deny any accusations made to the K-pop industry. Of course, the K-pop industry isn’t some magical la-la-land where bad things never happen even behind the scenes. Admittedly, some K-pop stars, among many others, have fallen victim under a cruel system from time to time. But this Dutch documentary is right to be criticized because it misleadingly only fixated on the unkind aspects of K-pop when its stated intentions were purely just to introduce K-pop and GWSN. The reporters of the film continuously showed little respect for their subjects and distorted innocent interviews to fit into the narrow mold of what they believe. It is easy to see the world only within your own scope. It shouldn’t be easy to a person who promised the truth, however.