BTS is now only one day and a few extra hours away from their long-awaited comeback.

Is it even possible for a human to look this good?? I'm shook! 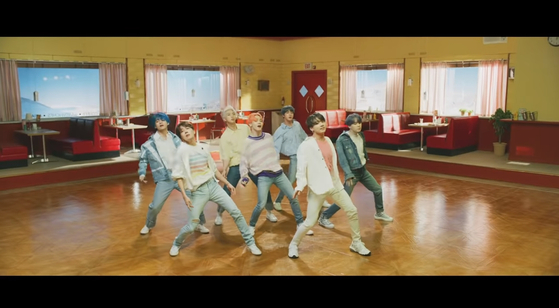 
Compared to the first teaser, each of the seven members is clearly visible and they each take turns getting in the spotlight. Their white suits and more casual attire along with the softly bright aesthetics captures the mood well as they each display their confidence and carefree vibes.


The retro set background reminiscent of the old film "Singin' in the Rain" adds interest along with the short but impactful performance to the melody teaser.

Perhaps the most talked about portion of this teaser, however, is from the very last few seconds, where the camera zooms up to V's face as he turns around. Fans' hearts skipped a beat as they saw him turn around and look straight at the camera with his handsome face and piercing gaze.


Comments like "V is so handsome" automatically flew out from the fingertips of fans watching the clip.


Looking back, this pose and stance are also reminiscent of the pose Taehyung struck back when BTS was at the Grammys. Here, also, he stood smiling at the camera and then whipped his body around an looked over his shoulder, once again making ARMYs' hearts stop.


BTS's comeback album MAP OF THE SOUL: PERSONA will be released tomorrow, April 12th, at 6:00 PM and their comeback stage performance will be held on the American TV show Saturday Night Live on NBC at night on the 13th (American time).