The K-Pop sensation, BTS has uncased the tracklist prior to the exceedingly anticipated release, letting the world know the group is about to return very soon.

The king is soon to be back 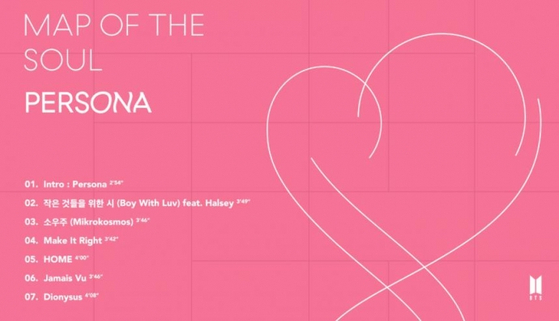 
On their official fan page and social media accounts, BTS revealed the tracklist for the new album MAP OF THE SOUL: PERSONA.

Included in the tracklist are 7 tracks. The album starts with Intro: Persona, an RM's solo track that was first introduced to the public a week ago. And the track is followed by Boy With Luv, the title track of the album with Halsey being featured on. Then it moves onto Mikrokosmos, which means "microcosmos" and is how the Korean title "소우주" is directly translated into. The album continues with Make It Right, HOME. Then here comes Jamais Vu, which sounds quite unfamiliar. This is a psychological term that is in opposition to "Deja Vu". "Jamais Vu" is referred the phenomenon of experiencing a situation that an observer finds very unfamiliar when the person has actually been in that situation before. The last but not least, Dionysus, a name of a mythological figure from ancient Greek religion and myth is listed as the last track to wrap up the album.

As BTS is known for the unique way of delivering narratives via their music, what kind of story the group is going to fascinate K-pop fans with is being the center of attention.