BTS's Album LOVE YOURSELF:TEAR Comes Close To Winning THE GRAMMY But Falls Through


While BTS has drawn massive attention from the media and the general masses with the fact that they were going to be a presenter at The Grammy, another thing that people had been keeping their eyes on was BTS's album being nominated in the Best Recording package category.

#TearItUpBTS! The nomination itself was a great honor for sure 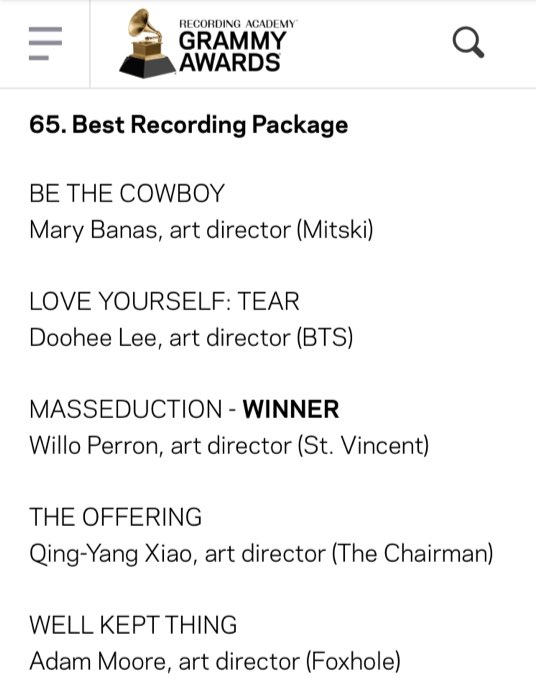 Photo from The Grammy


Doohee Lee, an art director of BTS's album. Love Yourself: Tear, was on the nomination list in the Best Recoding Package category along with the BTS's album.

It was the first time for a Korean album and a K-pop art director to be recognized in any category by The Grammy. Even though the glory of becoming the winner had to take a backseat to Wiillo Perron with the album Masseudction, the director and fans regard that the nomination itself was such an immense honor.


Mr. Lee, the art director shared his feeling on his social media saying, “Even though we didn't win, we would like to thank everyone who has paid attention to it! We never expected to be nominees. It was such an honor. I will enjoy the shows and will be back with great experiences!"

In celebration of BTS's historical appearance on the prestigious awards and their album being nominated as well as a means to express their feelings of gratitude and emotions, hashtag #TearItUpBTS is trending on Twitter among fans.

On the same day, BTS showed up on stage as a presenter for the Best R&B Album, which went ot H.E.R for her album H.E.R