WANNA ONE SUNGWOON Embraces BFF BTS JIMIN at SMA Like It's His Own Award!


Wanna One's Ha Sungwoon and BTS's Jimin once again showed fans a display of their friendship.

These two have such a great friendship, I love seeing them together!


A few days on January 15th during the 2019 Seoul Music Awards, BTS were called up once again to receive the Daesang award.

At the end of the ceremony, after BTS being called up to accept their prize and finish their anchor performance of IDOL, the top stars from the last year all went up on stage for a picture together.


After having fun dancing to the IDOL performance from beside the stage, Sungwoon was then seen clapping as he approached the members of BTS, and shook hands with Jin and RM, giving a quick hug to V and hand shake to Suga, exchanged a few friendly words with J-Hope, and lastly came up to Jimin for an especially big, full-on hug. (For those wondering, he did greet all seven BTS members, but Jungkook came on stage a bit later so they greeted each other after the pictures.)


Sungwoon and Jimin had been friends since even before Sungwoon became a part of Wanna One. Back in March 2017, Jimin posted a tweet on the BTS Twitter account telling other people to root for Sungwoon on the Produce 101 show, and he had also tweeted saying he wishes he could vote for Sungwoon, but he couldn't because he was abroad at the time. 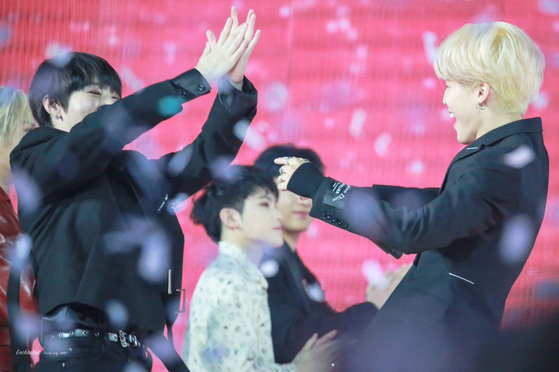 
Fans love seeing these two idols support each other, especially despite being from two different groups, both with a lot of popularity. Even with the disbandment of Wanna One, this friendship does not seem like it will be going anywhere any time soon. Let's support these Idols and their friendship!