MMO Entertainment, a company where Kang Daniel of Wanna One belongs to made an announcement regarding legal action they have decided to take against hate comments. 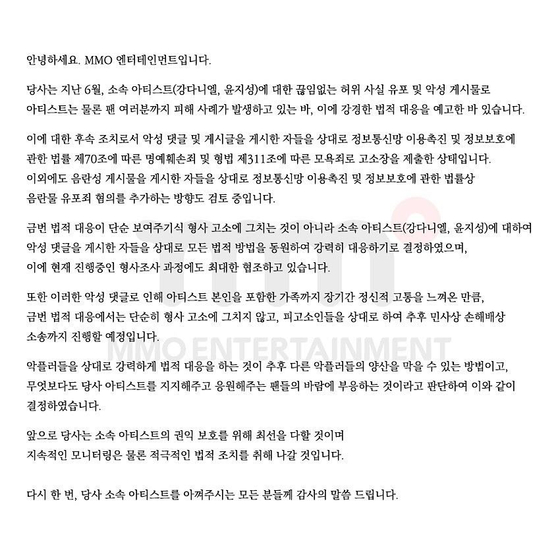 Earlier June, we have previously announced about taking legal action against the constant malicious posts and circulating false information about Kang Daniel that has been causing harm not only to the artist but also to our fans.

As a follow-up measure to this, we have filed a complaint against people who have made malicious remarks on Kang Daniel in accordance with libel and slander and article 311 of criminal law. We are currently under consideration of adding another charge of distributing pornography.

This time, we don't have a plan on ceasing after pursuing criminal charges. We have determined to take legal action against everybody who has left hate comments on Kang Daniel and Yoon Jisung with every means possible. We are enthusiastically cooperating with the undergoing investigation.

Furthermore, as not only the artists but also their families have been victimized by such comments for a long time, we are not going to settle for criminal charges. We are going to proceed to take civil actions as well.

We thought that taking firm action against haters is the only way to stop the emergence of even more anti-fans in the future. Above all, we thought that this is how we can live up to the wish of our fans, who have been supporting our artists.

From now on, we are going to do our utmost best to protect our artists' rights and interests by consistently monitor comments as well as taking legal action.

Once again, we want to express gratitude to those who always have been there to support our artists.
----

It seems that the company is being thoroughly prepared to have a war against haters.
Hope it works as an effective measure to root out the hate that is prevalent in the industry that makes artists suffer.
Let's pay attention to see how it turns out!