Video clips of WANNA ONE's manager resorting to extreme measures by pushing away fans has been going viral on various social media sites and online communities.

Hope WANNA ONE doesn't take any criticism for this..!


In the short video clips, WANNA ONE's manager is seen in the background following along their the members. To the side, an official security guard is seen wearing a suit and spreading his arms out so as to keep the fans from coming in contact with the stars. Yet, even when the security guard is only keeping the line, in the background, WANNA ONE's manager is seen actively pushing the fans, causing them to fall forward.


In another clip, most likely an airport, this time, WANNA ONE's manager is seen quite literally shoving a fan who seems to have been running up to catch a video of the stars. This fan is taken completely by surprise and losing her balance from the force of the thrust crashes to the ground in the midst of the crowd.


Many netizens have expressed shock over the two video clips. "Wow...is he some sort of gangster?" "I couldn't believe my eyes, but this is legit" "What happens if these people get hurt?" "Shouldn't someone call the police or something?"

Other fans worried about their stars, fearful that WANNA ONE's reputation might be affected. "If he keeps doing that the members' image will also be really bad." "I'm so worried, why isn't the label doing anything about this?"

A source explained that the manager in question wrote an official apology and was given a warning. Yet, many fans continued to express complaint, "Shouldn't he be fired, that was basically violence!" The subtle (?) line between violence and protection, is it that hard to discern? 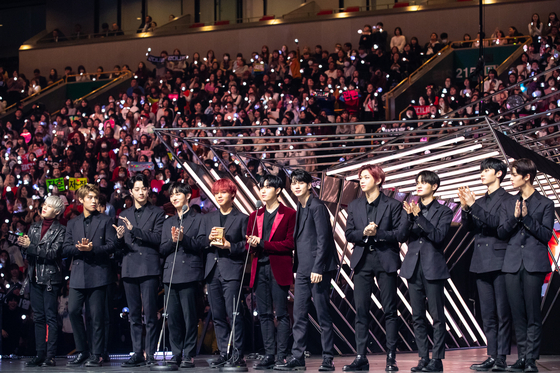