TWICE has confirmed the popularity in Japan.

It's jaw-dropping how they've made it! 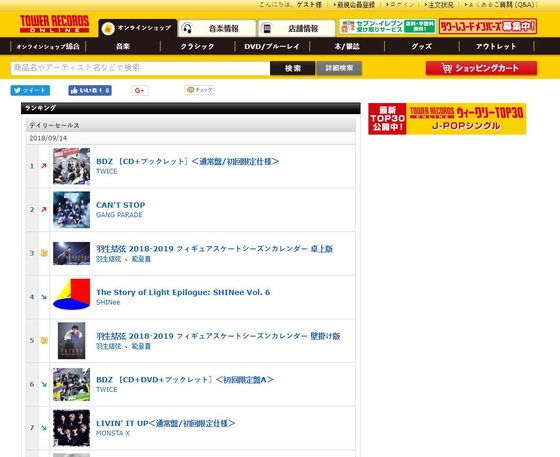 
On '2018 Best Sellers' published by Tower Records on the 3rd, TWICE's 1st Japanese full-length album, BDZ took the first place on 'K-POP Domestic Album Top 10'. In addition, their 3rd single, Wake Me Up is on the top on 'K-POP Domestic Single Top 10'. Their 2nd single Candy Pop is placed 2nd on the same chart.

Additionally, What Is Love?, Summer Night, and Yes Or Yes are respectively ranked 2nd, 4th, and 6th on 'K-POP Import Album Top 10'.

While it is very pleasing to hear such news, it's barely surprising since TWICE has already dominated Oricon daily, weekly and monthly charts with their 1st Japanese album, BDZ.

Along with the full-length album, their singles also gained platinum certifications by Recording Industry Association of Japan.

At the yearend, they are planning to continue their successful career in Japan.

On the 30th, they will receive an award at Japan Record Awards that is given to an artist or a group who have put out a well-made album in the year. Moreover, on the last day of the year, TWICE will make their appearance on Kohaku Uta Gassen, a popular Japanese music show for a second time in a row as a K-POP group.

Let's keep an eye on their roaring success!