A news anchor who made sneering remarks toward BTS and their has come under fire.

I can't believe how an anchor can be this disrespectful!

Previously, BTS had given a speech at the opening ceremony of UNICEF's new global campaign, 'Generation Unlimited' on September 24, at New York UN headquarters. BTS' leader RM, who spoke on behalf of BTS, ended his speech successfully, conveying the message to 'Speak Yourself'. After the speech, praises from countless local press and fans poured on BTS. 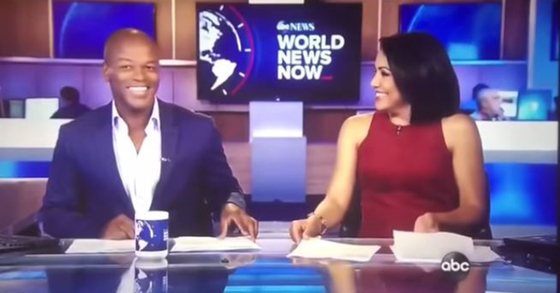 
However, Kendis Gibson, who was reporting this news on World News Now, made statements that sounded disrespectful.

As BTS' music video of IDOL was being played, he said, "Fans are used to seeing them spreading their legs like this on the stage," which is a comment that has zero relation to BTS' UN speech. Moreover, hearing parts of RM's speech, he said in a sarcastic voice, "Speak yourself. That's so poetic. I'm seriously in tears."


Towards the end of the report, he added comments such as, "It's a boy band of Korea", "They've got choreographed dance moves", while he was laughing and shaking his as if he considers all the craze as absurd.

After the broadcast, BTS' fans started pointing out how prejudiced and demeaning the anchor's comments were. They wrote comments such as, "He is so insulting. BTS is doing more for today's youth then he'll ever or can ever do for anyone!", "Make this go viral and make him apologize!"

Although the controversy is going on, the anchor has not shown any response to fans' request for an apology.