Lee Jong Suk and Suzy starred in Korean drama While You Were Sleeping received the 'Best Couple Awards' in 2017 SBS Drama Acting Awards.

MC asked, "I heard that people do fall in love while they act"


This day, Yang Se Jong and Seo Hyun Jin from Temperature of Love, Ji Chang Wook and Nam Ji Hyun from Suspicious Partner, and Lee Jong Suk and Suzy from While You Were Sleeping have been nominated for the 'Best Couple Awards'.

Among all others, Lee Jong Suk and Suzy were chosen to receive the award and they briefly stated feelings about winning the award.


Suzy mentioned "Thanks to all our viewers who loved Hong Joo and Jae Chan. It's all thanks to Jong Suk." Lee Jong Suk said "I love you our team. Thank you for your hard work Suzy, and thanks to all viewers who've spared their precious time watching our drama. And to my fans, thank you for loving who I am although I am just a nobody."

And the emcee at the site, Shin Dong Yup asked these two "I heard that people do fall in love while they act", and Lee Jong Suk frankly confessed "Suzy is one of the prettiest actresses in Korea. I loved her at times while filming this drama." 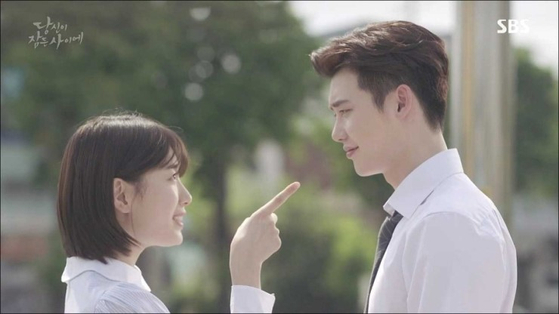