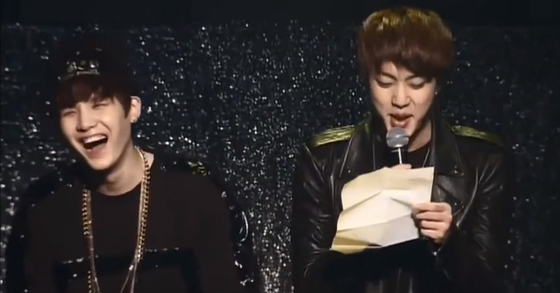 
For the BTS who is in five years of their debut and has grown into a global group has two big ‘Hyungs’.

Fans were touched by their friendship!

Although RM is doing well at the leader’s role, it is an elderly person who gets expected to play the role of 'eldest brother' in Korean sentiment.

That "The eldest" JIN has written a special letter to YOONGI, the second eldest.

It was at the Japan Showcase in 2014. JIN said, "I wrote a letter to SUGA," and surprised everyone. And JIN made gestures with hands and called SUGA. The MCs were surprised and said, "Everyone doesn’t know what’s going on. Just you two guys?”

When JIN pulled out the letter, SUGA was very happy! Then JIN read the letter calmly. 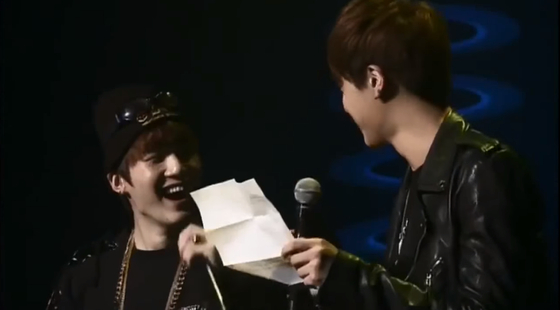 
"You are the person who is always cool, but acts like strong and playful, but I truly respect you so much. I think you are very awesome that even though you had the worst condition that can never be imagined, you hardly stood up and performed in order to make fans happy. If I were like your condition, I wonder I could stand on the stage. So, you are proud of the BTS. SUGA, don’t strain yourself and take it easy. Also, you can reveal the weakness sometimes. Let’s rely on the members and do our best for the people who support us. Also, let’s make legends with our fans. I believe we can do it. Let’s do well. JIN” 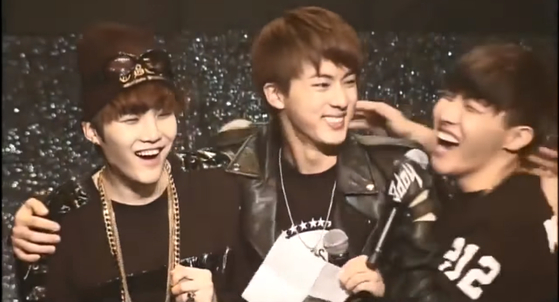 
At that time, SUGA was not in a good condition because of appendicitis so he could not even attend the SBS Music Awards Festival which was held at the end of the year. However, he appeared brightly on the stage of the BTS’s first showcase in Japan. The BTS carried out the showcase twice in Tokyo on January 6, 2014, and once in Osaka on January 7th, 2014, and sold all 6,500 seats. Starting from this showcase, the BTS took a leap forward as a full-fledged Hallyu star.