Is Swift one of the ARMYs too?


BTS at the stage where the whole world has the attention on, together with far-famed celebrities! BTS rose to the stardom just in 5 years since the group's debut in June 2013, and this is the time ARMYs have long waited for.

In this episode, a world-famous pop singer Taylor Swift has visited BTS' waiting room and took a photograph together.


On July 31, Youtube channel dropped [EPISODE] BTS (방탄소년단) @Billboard Music Awards 2018. BTS got to meet numbers of celebrities including Taylor Swift who came to visit BTS at their waiting area.

She greeted the group "Congratulations on everything. Are you performing today?"


And as if she has watched the Fake Love music video, she conveyed how she reacted "I was like, what am I watching... the coolest thing!", giving the greatest compliment to the group. 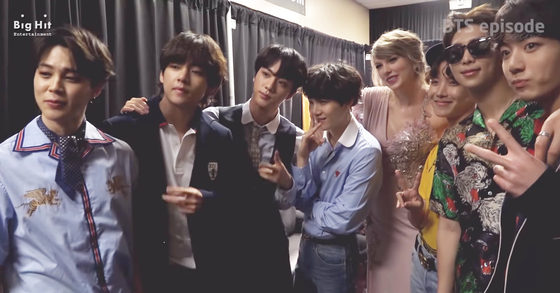 
Accordingly, RM thanked Swift, and Swift suggested the group to take a picture with her.


Suga seemed stunned with Swift's sudden appearance and her height, saying "Wow she's tall but she even wore a heel " shortly after Swift left the site. And J-Hope also seemed flushed with excitement "This is a big thing. Wow!"