"It's Like the Reverse of What We Used to Do," BACKSTREET BOYS Explain Their Feelings about BTS


When this five-member group appeared on an American radio show on June 17, the host asked them, "What does BSB(Backstreet Boys) think about BTS?" At this question, all of the members replied in chorus, "They're cool!"

In particular, Nick Carter, a member of BSB, emphasized the meaning of BTS' success in comparison to BSB's past success. He said, "It's kind of like the reverse of what we used to do when we first started. When we went over to other countries, we'd see fans singing every single lyric of our songs in English. Now we see a lot of teen girls singing in Korean. So it's kind of like the reverse happening, and I appreciate that. I think it's great that our society, America, is finally embracing other cultures."

"We'd like to say that their music breaks down barriers like how our music did in the past," he once again added as other members agreed in one voice.

BSB also mentioned how BTS makes them reminisce about their old days. When the host mentioned about BTS' passionate fandom, BSB members said "(It makes us) very reminiscent," "Oh, the good all days," and "Very similar (to our fandom 25 years ago)."

Member Howie Dorough especially said, "People have always asked us, 'Is there any other boy band that is doing the same thing as you guys?' and we'd honestly say it's totally different. But when BTS came around, we felt like they're the first group that's doing the full entertainment package(singing, dancing). So we're happy to see them doing their thing." 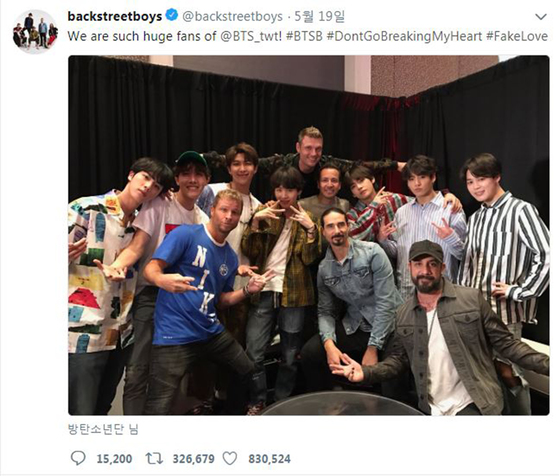 
Backstreet Boys have already expressed their support for BTS last May, by uploading a picture taken together with BTS, and by writing a caption saying "We are such huge fans of BTS!"