Hahn Seo Hee, the infamous trainee who was involved in the marijuana scandal with BigBang's T.O.P provoked a lively controversy and triggered netizens once again by saying she met BTS' V at a club in the past.

She was involved in the marijuana scandal with BigBang's T.O.P before.

In the midst of filming her live broadcast on Instagram, one of the viewers asked if she is fond of BTS. And to the question, she answered "Who would like EXO and BTS at this age? I went to the club with Taehyung (V) when I was 19. One of my close friend Kim Ki Bum (model) brought V with him."

With such unexpected disclosure, people asked if V went to the club when he was underage. She said, "I went a lot, but I'm not sure if he did."

Together with BTS' popularity, this issue rapidly spread online and offline and through his model agency, Kim indicated his stance "I've known V previously, but never went club with him. I've also known Hahn but there was no interaction between me and her after she got famous online." 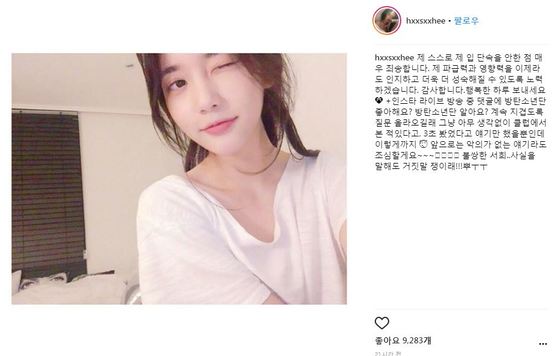 
As she caused an uproar among ARMYs with sudden ridiculous debate, she made an apology saying "I would like to apologize for referring someone thoughtlessly. During Instagram live, I mindlessly spoke out that I ran into V pre-debut when someone asked me if I like or know BTS, but people seem to misunderstand that we have some kind of interaction. However, it isn't true that I saw him in the club when I was 19, and I truly feel sorry for people who got involved in all this matter."

Hahn Seo Hee appeared on 2012 MBC's audition program The Great Birth 3 and spent her time as a trainee afterward. Then she got busted on smoking Marijuana in 2016 and was sentenced to three years in prison with four years of probation in an appeal held last September.