Another Online Threat Against BTS JIMIN at Fort Worth Venue During Their Concert in September?


BTS's Jimin received another death threat from a foreign netizen.

This person should better use his time somewhere more wisely.


Police have confirmed an online post threatening to shoot Jimin at BTS's Fort Worth concert in forthcoming September 16. While one of BTS fans saw this post and alerted both BigHit Entertainment and the Visit Fort Worth, this life-threatening post has come to their attention and Forth Worth Police started investigating its lowdown. 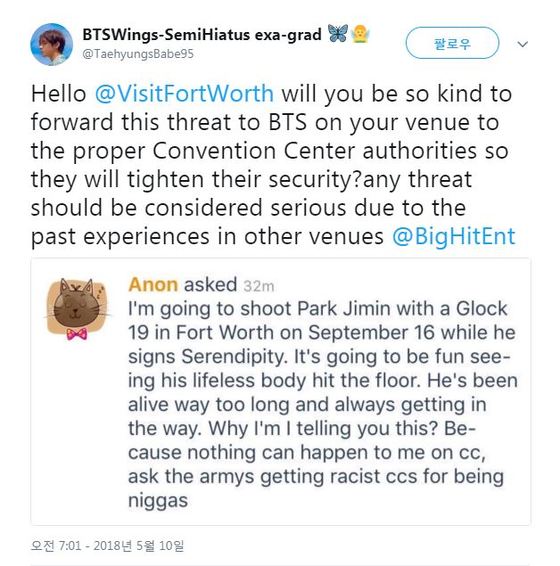 
On May 10, Fort Worth Police responded by replying "We are aware of the threat made to the BTS concert (in Sept) and it is currently being investigated/looked into." With a bare possibility, security measures will be reinforced with metal detectors at the venue.


BigHit Entertainment made its position that they'll have full assurance of members' safety. They said, "It came to our attention of an online post to threat Jimin. Whether or not it is true, we will do our best to take necessary measures to fight against threats toward members and fans."

This is not Jimin's first time to receive a life threat. Last year, a Twitter account threatened to shoot Jimin at the California venue. The more shocking part about the incident was that this deranged anonymous anti-fan who've made a death threat specifically targetted Jimin and posted photos of concert seat plans and guns.

Fortunately, nothing has happened at the venue, and possibly a recent death threat in Fort Worth may simply be another hoax, BigHit Entertainment clearly announced "We've perfectly prepared for happenings just in case, and nothing happened in California. However, we would not take this threat lightly and will keep an eye on things to monitor safety and security."