How BTS' SUGA Came to Share His Story of Battling Depression


As an adolescent, Suga was a victim of depression, OCD, and sociophobia. His environment could not provide for a career in music, and during a part-time delivery job to support himself, he went through an accident that shattered his shoulder.


The mixtape Suga produced and released for free contains the track 'The Last.' The piece deals with what Suga feels as an idol after going through a hostile adolescence.

In an interview with Yonhap News on January 28, the BTS boys discussed their anxieties. Members poured out their hearts, speaking about how, since their debut in 2013, they had come to face the cold hard reality. Making a reference to Suga's 'The Last' of his mixtape, the members discussed the discrepancy they felt between now in the spotlight and back in their training years, and how they had been exposed to depression and obsession.

Which all led up to the question: Looking back in your trainee years, how did you beat the instability and how far do you think you are down the path of your dreams?


Suga stated, "anxiety and loneliness stay forever. And how you choose to make peace with them, that needs a lifetime of consideration."


And he added how he wrote the lyrics to 'The Last.' Suga stated, "Every situation and every moment, the feelings are so different, so I think life is where you constantly contemplate. So, through the lyrics, I wanted to deliver the message 'I'm restless and so are you, so let's try to find and study together'."


His piece 'The Last' captures Suga's dark side.


"On the other side of the famous idol rapper / Stands my weak self, it’s a bit dangerous / Depression, OCD, they come back again from time to time / Hell no perhaps that might be my true self"


"At times I’m scared of myself too, thanks to self-hatred and / The depression that pays a visit / Min Yoongi is already dead (I killed him) / Comparing my dead passion with others has long been my daily life"


Through the lyrics, Suga seems to say that although he's achieved his dream, the anxiety hasn't gone away. But a recent interviews show Suga much brighter and in a good place. 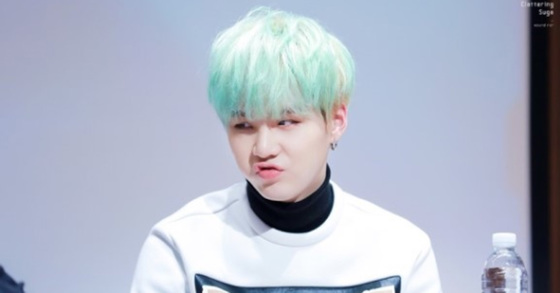 Suga making a funny face during a press conference.


Suga says "I've never not had a dream, and I made it all come true. In my trainee years, I wanted to make my debut. Afterwards, I wanted to land No.1. After that, winning the grand prize and performing in Japan and the U.S. I didn't even dare to dream of Billboard and the American Music Awards but it all came true.


Suga stated, "I don't have much of a clear goal as I did in the past, but recently, I've had a change of thought" and added, "I value myself as a human being and my happiness and I'm still far (from achieving those). I've come so far as an artist, but last year was a turning point for me. I'm only 26 years old, and I've been in the music industry for ten years, counting the years before my debut, but I plan to do it much longer."

■
Suga - 'The Last'
「
On the other side of the famous idol rapper
Stands my weak self, it’s a bit dangerous
Depression, OCD, they come back again from time to time
Hell no perhaps that might be my true self

Damn huh reality bites
The conflict with ideals, my head hurts
Sociophobia hit me around 18
Right, that was when my mind was gradually tainted

At times I’m scared of myself too, thanks to self hatred and
The depression that pays a visit
Min Yoongi is already dead (I killed him)
Comparing my dead passion with others has long been my daily life


The doctor asked me
Without hesitation I said I did

Habitually saying uh I don’t give a shit I don’t give a fuck
All those words uh to hide my weak self
That day I wish I could erase, right, that faint performance day
Scared of people and hiding in the bathroom stall, I faced that self

Then I, then I
Thought success would pay for everything
But see, but see
As time goes by, I feel like I'm turning into a monster

In place of my youth, there's the monster that is success, and it wants more wealth

The greed, once my weapon, eats me alive, ruins me, and sometimes puts a collar around my neck
Some shut my mouth, tell me to swallow the Forbidden fruit
I don't want it They want me to leave the garden

Shit shit I got it so stop it
I’m the root cause of all this so I’ll put an end to this myself
If my misfortune makes you happy, I'll gladly be unfortunate
If it's me you hate I'll step onto the guillotine

Seiko to Rolex, AX (Hall) to Gymnastics (Arena)
My hand moves and thousands of heads nod along
Show Me The Money I didn't, not couldn't, shit
Those who sold us, you couldn't, not didn't, shit
The source of my creativity tasted all in the world, the sweet, the bitter, the shitty tastes
Days I fell asleep on the bathroom floor that's all memories now uh memories
My part time delivery job that left me with a shattered shoulder
Clutching, I held on, made my debut, you can't pretend that you know the cold hard world

Seiko to Rolex, Hall to Arena
My hand moves and thousands of heads nod along
Sorrow gave birth to me uh take a good look at me uh
Those who sold us, you couldn't, not didn't, shit