BTS' V Sings a Breakup Song at Karaoke with His BFF


How would the most beautiful face on Earth enjoy his time at the karaoke?

You can classify your ordinary karaoke-goers. The team get-together businessmen usually sing an upbeat, bubbly pop track, for all ranks of the company to enjoy.


And it goes the same when you have a night out with a bunch of your friends or colleagues. Unless you're the best of friends, you tend to be conscious of others. You can't enjoy yourself while others are just standing there, clapping along to an unfamiliar song that you carelessly chose.


But should you visit the place with your best friend, you're free to sing whatever song you want. You can sing your personal best, which no one really knows about, or you can choose to go along with a tranquil, sad song, which would normally kill the mood.

Well then, what does BTS' V sing at the karaoke with one of his closest friends? On February 19, a clip of V singing Noel's 'If' was uploaded on BTS' Twitter account.


'If,' a track of Noel's fourth album sung by Jeon Woo-sung, a member of a four-member male group Noel, is a sad ballad to a now-departed lover.


V visited the karaoke with a close friend of his, who is a musical actor. V actually introduced his friend in September. V stated, "My seven-year-long friend, who was always in the same class with me ever since I came to Seoul," adding "My musical actor friend Seong-jin, we promised to meet each other at the top of our pyramid." 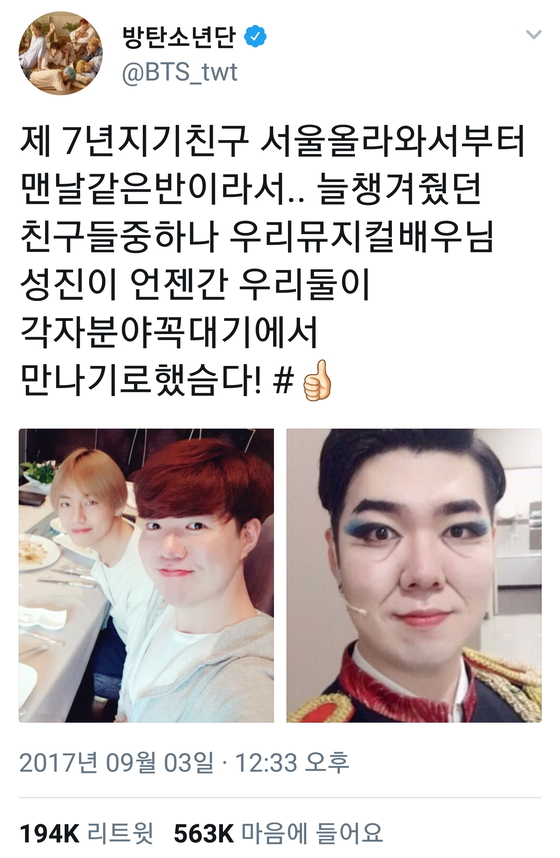