Fellow stars have come to pay respects to the brilliant and beloved artist who left the world so young.


SM Entertainment confirmed the death of the vocalist of SHINee, the massively popular five-member boy band, through a statement that read: "We are sorry to share such heartbreaking and tragic news...SHINee's Jonghyun left us suddenly...He was a great artist who loved music more than anybody else...Once again, we send our deepest condolences to the late artist." 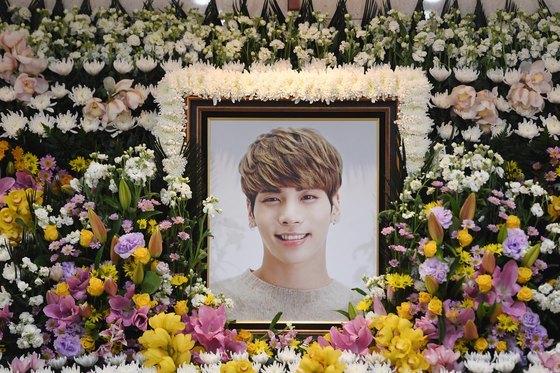 Kim Jonghyun, 27, has been laid to rest at a private funeral ceremony at Asan Medical Center in Seoul.


Kim has been laid to rest at a private funeral ceremony at the funeral hall of Asan Medical Center in the Songpa district of Seoul.

Family, fellow artists, and colleagues have come to pay their respects and bid goodbye to the brilliant and beloved star who left the world so young.

Other members of SHINee - Choi Minho, Lee Taemin, Lee Jinki, and Kim Kibum - greeted the guests who were allowed in starting at 11 a.m. on December 19.

The founder and CEO of SM Entertainment Lee Soo-man and fellow artists at the same music label including Girls' Generation, EXO, and NCT came to pay their respects. BTS was among the star guests who came.

Fans are invited to mourn the artist's passing at the basement of the medical center.

The procession will leave the funeral home on December 21.