This Man Was Spotted Entranced by BTS' Performance at AMAs 2017

On November 19, BTS performed their new single DNA at the AMAs, which took place at the Microsoft Theater in Los Angeles, California.

The Chainsmokers invited the band to the stage, commenting that "to be honest I'm a little bit nervous to announce this next performance." "To call these guys international...feels like an understatement," the duo added.

The crowd roared as BTS showed up on stage.

As the group took the stage to perform DNA, the electronic lead single from their most recent album that landed in the Top 10 of the Billboard 200 Chart, some of the fellow musicians took their cell phones out and began filming the boys absolutely owning the stage.

Ansel Elgort, in particular, definitely seemed like he was enjoying the performance.

The Baby Driver actor and BTS had previously met at the Billboard Music Awards in May.

Elgort, who was one of the presenters, had a bonding moment with the boy band as they reunited at the AMAs. 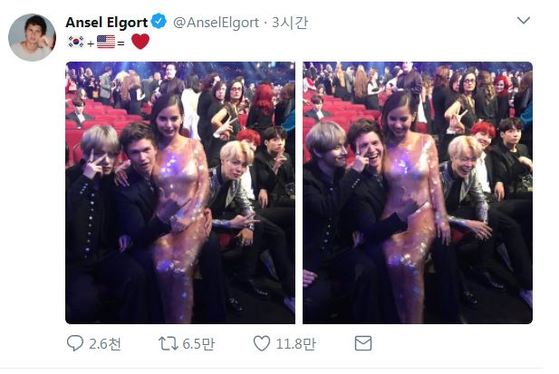 He tweeted a photo of BTS, his girlfriend Suki Waterhouse, and himself together from the event with a set of emoji's that combined the South Korean flag and the U.S. flag to form a heart.

There was no shortage of superstar performers at this year's AMAs including Christina Aguilera, Selena Gomez, Kelly Clarkson, and P!NK. BTS was the only Asian music group to be invited to perform. They are also the first K-Pop group ever to perform at the Awards.