Why BTS is Linked to President Trump's Impeachment 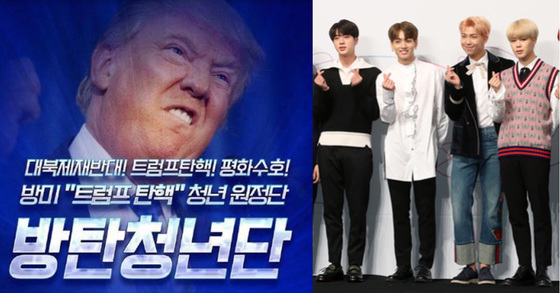 Fans of Bangtan Boys(BTS), a globally known idol group, continue to protest against BTC, a South Korean organization with a political agenda to impeach President Donald Trump of the United States.

Although completely irrelevant to the boy group, fans are concerned that the similarity in names may negatively affect BTS. Fans claim that BTC deliberately chose a similar name to BTS in order to attract attention. BTC, an abbreviation for BAN TRUMP'S CRAZY ACTION, is similar to BTS not only as English acronyms but also in Korean. In Korean, BTS is pronounced as Bangtan Sonyeondan, whereas BTC is pronounced as Bangtan Cheongnyeondan.

In response, on October 26th BTC stated via Twitter that "We're sorry for the inconvenience we caused, regarding how similar the names were…we just wanted to spread words for peace."

BTC added "We realize that we were wrong and hope the fans accept our sincerest apologies." BTC subsequently promised to use a new name, which would obviously distinguish the organization from BTS. The new name can be roughly translated into 'Youth Expedition to the U.S. for Impeaching Trump.'

BTC, formed on September 18th, consists of youth members of the Korean Confederation of Trade Unions, KAPM(Korea Alliance for Progressive Movement), and MINBYUN-Lawyers for a Democratic Society. BTC planned to leave for the United States on October 25th and engage in protests aimed at impeaching President Donald Trump. However, on the day of departure, the United States denied entry to all 14 members of BTC via notice by United Airlines.